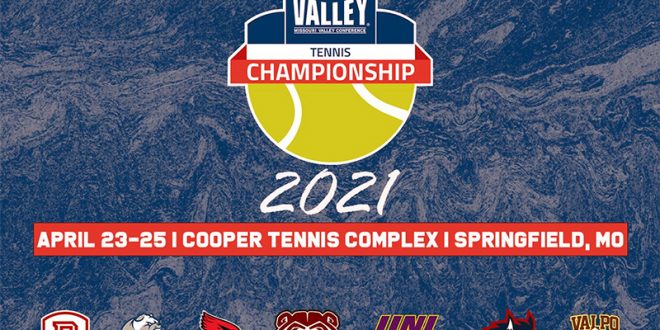 The Bears are the No. 3 seed for the seven-team event and open quarterfinal play on Friday at 10 a.m. against No. 6 seed Valparaiso.

“We worked really hard to have a good position in the MVC tournament,” head coach Hannah Keeling said. “The girls are pumped up. They have worked hard and are excited to get out and compete. We cannot wait to get the matches started.”

Valparaiso enters the postseason with a 6-12 overall record while going 1-4 in MVC play. Valpo won its first conference match over UNI, 5-2, before dropping four-straight to conclude the regular season. In the regular-season finale, Valpo fell to Bradley, 5-2. Olivia Czerwonka leads the team in singles play with an 11-7 overall record while competing in the No. 2 flight. In doubles play, she teams with her sister Claire as the duo has a team-best 12-6 mark in the No. 1 position.

Missouri State concluded its regular season with a thrilling 4-3 win at Drake. With the win, MSU finished its regular-season conference slate 4-1, which is the best mark by a Bears squad in over a decade. The Bears got out to a solid start by securing the doubles points courtesy of wins at the No. 2 (Alyson Piskulic/Hana Sisirak) and 3 positions (Mara Presot/Mary Houston). Sisirak (No. 1), Ellie Burger (No. 2) and Tiffani Nash (No. 3) all recorded singles wins to give MSU the victory. Nash and Burger are the Bears’ top-threats in singles play this season. Nash leads MSU in wins on the season with 14, which is the most by an MSU freshman since 2006. Burger is one of the most decorated players in program history as her .712 winning percentage ranks second all-time.

The Bears defeated Valparaiso, 5-2 in the first meeting between the teams on April 10. MSU gained the early lead by securing the doubles point with wins in the No. 2 and 3 matches. Sisirak (No.1), Nash (No. 3), Shaw (No. 4) and Martin (No. 6) all were victorious in singles play to lead the Bears to victory.

With a win, the Bears would advance to play the winner of Stony Brook vs. Northern Iowa match on Saturday at 2 p.m. for a chance to advance to the championship match on Sunday at 10 a.m.