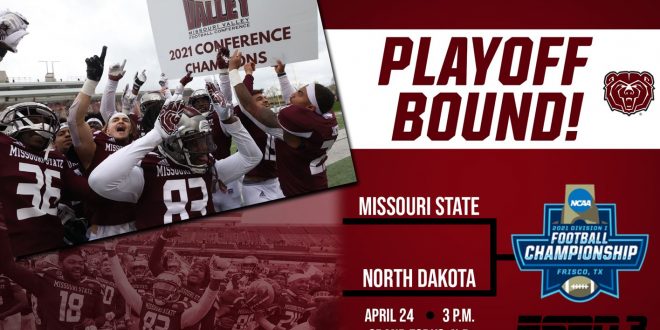 INDIANAPOLIS — For the first time since 1990, Missouri State is in the NCAA FCS football playoffs.

After winning a share of the Missouri Valley Football Conference regular-season title, Missouri State was one of six at-large selections announced Sunday morning to compete in the 16-team NCAA national playoff.

The Bears will play a first-round game Saturday, April 24 at North Dakota at 3 p.m. (Central). The game will air on ESPN3. The winner will play either James Madison or VMI in the quarterfinal round the following week.

The playoffs culminate with the FCS national championship game in Frisco, Texas on May 16.

Missouri State finished 5-1 in the MVFC this spring, including wins in its last four consecutive games to end the regular season. The Bears tied South Dakota State for the MVFC title, earning a share of a conference championship also for the first time since 1990.

Ticket information for Saturday’s game at North Dakota will be announced later. NCAA championship venues are being restricted to 25 percent capacity for the playoffs.