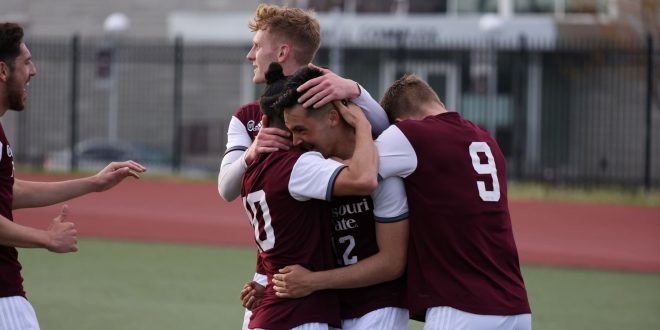 With the win tonight, the Bears (10-1-0) earned a trip to their second straight – and 11th overall – MVC Championship match where they will face No. 3 Loyola who advanced on a 4-1 win versus Drake earlier today.

“The guys did a great job tonight, Bradley is always a tough matchup and these conference tournament matches are never easy,” said sport director Michael Seabolt.  “They stayed mentally strong after conceding a goal and stayed on task to create and score three goals.  We talk all the time about staying in the moment and credit to the guys for doing just that tonight.”

Bradley (2-7-2) seemed unfazed with facing the Valley’s regular-season champion as the Braves came right out of the gate with an aggressive attack that resulted in the game’s first goal.

Inside MSU’s 18-yard box, Gerit Wintermeyer launched a shot that was initially turned away by goalkeeper Michael Creek but the deflection fell right to the leg of BU’s leading scorer, Rasmus Smidtslund who knocked in the goal to give the visitors an early 1-0 lead.

After Bradley’s game-opening score, Missouri State provided a quick response to draw the match even in the 10th.  Aadne Bruseth collected a pass from Nicolo Mulatero and jockeyed his way into position before sliding a shot thru the defense that took a fortune bounce off the post and into the net for the equalizer.

Then, in the 38th minute, it was Mulatero who created some space and fired off a right-footed strike to put MSU on top, 2-1.  As the league-leader in points and goals, the junior forward bagged his seventh goal and fifth multi-point match of the season.

The action-packed first half wasn’t over yet as the Bears came right back two minutes later to notch their third and final goal of the semifinal match.  Mulatero set the stage yet again with a high-arching cross that found a perfectly-positioned Jesus Barea who knocked in a header for the decisive blow just before halftime.

The three first-half goals for Missouri State were the most for a Valley team in a semifinal first half since Creighton scored three against Drake in 1996.

In the second period, the Braves moved their lines up the pitch looking to cut into MSU’s two-goal cushion.  Back-to-back shots on a BU corner kick kept the Bears defense on its toes as they watched the latter attempt sail high over the goal.

From there, the ball stayed primarily in the Missouri State attacking half as the Bears peppered the Bradley defense with 12 second-half shots including three straight that landed on target but were corralled by Braves keeper, Bryce Logan.

With the match in hand, the Bears utilized their deep bench to bring on fresh legs and spell the rotation before the final whistle signaled their advancement to the title round.

It was the three-headed attack of MSU’s forwards along with midfielder Josh Dolling who led the offensive charge, tallying 13 of Missouri State’s 19 shots in the match.  Dolling and Barea each chipped in an assist to join Mulatero’s two-dime effort.

In a rematch of last season’s tournament finale, the Bears will face the Ramblers on Saturday, April 17 with kickoff from Betty and Bobby Allison South Stadium set for 2 p.m.  A live stream of the match will be available on ESPN+.