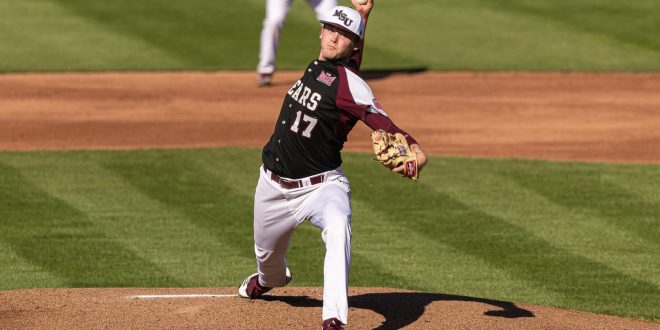 2) MSU’s last four victories have come in the team’s final at bat. The Bears won in 10 innings on March 30 SEMO and have three walk-off wins in the bottom of the ninth inning already in April – Cam Cratic getting hit by a pitch with the bases loaded on April 1 against Bradley, Mason Hull’s game-winning single on April 2 versus Bradley, and a Drake Baldwin home run on April 6 against Drury.

3) Keith Guttin currently ranks third on the NCAA’s Division I wins list for active coaches and 19th all-time with 1,299 for his 39-year career; he is 1 win away from Fresno State’s Bob Bennett in the 18th spot on the chart. Ironically, Guttin’s 1,200th victory came against MU on April 18, 2017 in Columbia.

4) The MVC has a new format for league series this season, with teams meeting four times per weekend with a doubleheader on day two. The first game of the doubleheader will be scheduled for seven innings.

5) Missouri State and Missouri are tied 29-29 in the all-time series while the Bears lead Evansville 58-42.

6) MSU has four college graduates on the roster, with Jack Duffy, Logan Geha, Ben Whetstone and Logan Wiley each electing to use the additional season eligibility granted to 2020 spring athletes.

8) There are several upcoming milestones to watch for the Bears. Jack Duffy is 9 hits away from 200 in his career. With 207 games played, Duffy is 8 away from MSU’s top 10 and 29 from tying the school record. With 34 career starts and 231.1 innings, Logan Wiley is 5 starts from MSU’s top 10 and 12.2 innings away. Logan Geha will move to 4th in school history the next time he is hit by a pitch, and 3rd with his next sacrifice bunt. Ben Whetston is MSU’s career fielding percentage leader at .993.

9) Jaden Rolffs ranks 14th nationally with 0.40 home runs per game, and has a homer in five of his last seven games. Ben Whetstone ranks 11th nationally by drawing one walk per game.

Leading Off
The Missouri State Bears (11-10, 2-2 MVC) will play five road games this week, beginning with a 6:30 p.m. Tuesday contest at Missouri (11-19, 4-8 SEC).
The Bears then head to the Hoosier State for a four-game series with Evansville (18-12, 3-4 MVC) April 16-18. The MVC schedule takes on a new format this season, with teams meeting four times per weekend with a doubleheader on day two. The first game of the doubleheader will be scheduled for seven innings.