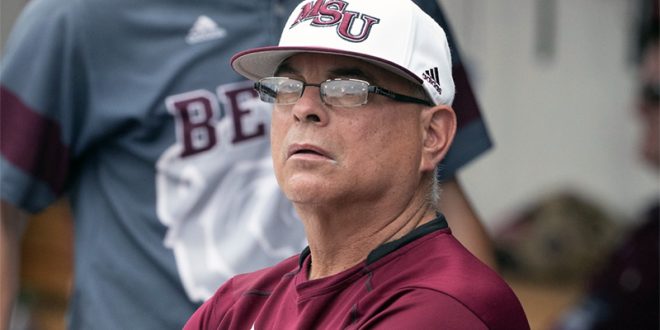 Despite the 39th-year head coach missing the game while nursing a back injury, Guttin’s Bears jumped out to a 6-0 lead and held on for him to tie longtime Fresno State skipper Bob Bennett for 18th-place on the Division I all-time wins list.

The Bears (12-10) immediately had two runners in scoring position to begin the game thanks to Cam Cratic’s leadoff single and a double by Grant Wood, setting up a Ben Whetstone sacrifice fly that plated Cratic before Wood scored on a double steal later in the inning.

Walker Jenkins, who went 2-for-3 with two walks and three stolen bases in the game, began the second with a bunt single and later scored on Wood’s sac fly for a 3-0 lead, and MSU loaded the bases with no one out in the third inning, making it 4-0 when Logan Geha walked to force in a run.

Missouri State manufactured two more runs in the fifth, with Mason Hull scoring on a leadoff double and two wild pitches, and Jenkins doing so with a walk, steal, wild pitch and Geha sac fly for a 6-0 advantage.

The Tigers (11-20) got on the board with an unearned run in the fifth, and Dakota Kotowski answered by launching a solo homer out of the stadium in left in the seventh, his third of the season and the Bears’ only run of the night that was driven in by a hit.

Missouri closed to 7-5 with four runs in the bottom of the eighth before the Bears ended the rally by throwing a Tiger runner out at home, and Hayden Jeunger closed the door with a 1-2-3 ninth to complete his second save of the season.

Seven Missouri State pitchers combined for 12 strikeouts, and Logan Wiley (4-1) was credited with the win in the predetermined short start. Forrest Barnes struck out four in his two innings, the longest outing of the night for any MSU hurler.

The MSU offense drew 10 walks in addition to its eight hits and swiped six bases for the first time since 2017.