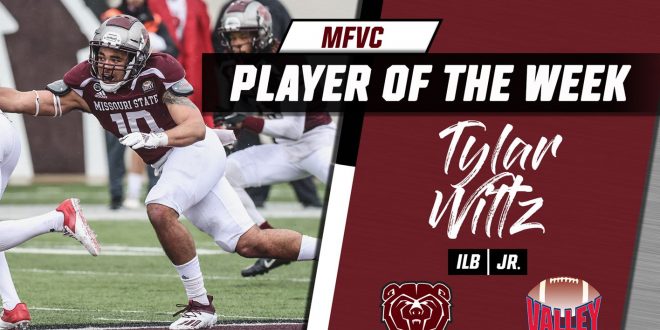 Wiltz had a game-high and matched a career-high with 12 total stops in Saturday’s game. He notched all 12 solo stops, all on rushing plays, as the Bears held the Penguins to just 267 total yards. Wiltz also accounted for 3.0 tackles for loss, including a fourth-down TFL in the third quarter to stall a Penguin drive in MSU territory. He also was credited with a quarterback hurry in the second quarter that ultimately led to a YSU punt.

Wiltz previously earned MVFC Performer of the Week distinction after MSU’s game at Oklahoma in September. He is the third Bear to earn MVFC Defensive Player of the Week this spring, joining teammates Kevin Ellis (Feb. 28) and Montrae Braswell (March 14).

With this week’s win over Youngstown State, Missouri State concluded the spring with a 5-1 ledger in MVFC games to share first place and earn a share of the league championship for the first time since 1990.

The Bears will learn their postseason fate next Sunday (April 18) with the FCS playoff selection announcement. This year’s NCAA championship field will include just 16 teams – instead of the traditional 24 – with only six at-large bids up for grabs.