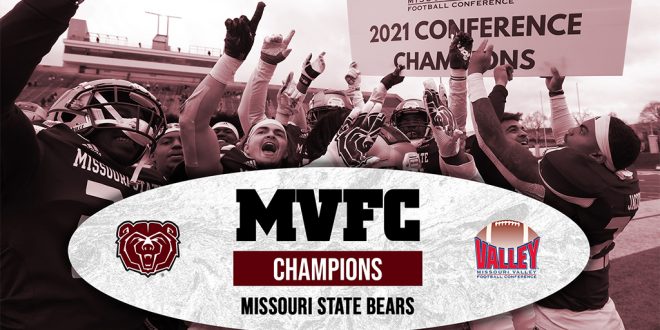 SPRINGFIELD – Missouri State scored 21 unanswered points in the second and third quarters and parlayed that momentum shift into a 21-10 victory over visiting Youngstown State here Saturday, clinching a share of the Missouri Valley Football Conference title for the Bears.

No. 15-ranked Missouri State improved to 5-1 in the MVFC and secured at least a share of the MVFC title for the first time since 1990.

Leading the charge for the Bears was quarterback Jaden Johnson who came into the game late in the second quarter after starter Matt Struck went down with an injury. Johnson engineered three consecutive touchdown drives to give the home side the cushion it needed to secure its fourth straight league win.

Johnson finished 6-for-12 passing for 73 yards and a pair of touchdowns. He also did damage on the ground, carrying 11 times for 56 yards. Though Struck had been the MSU starter the previous two games, MSU head coach Bobby Petrino said Johnson stayed mentally and physically ready for an opportunity.

“It shows a lot of character on Jaden’s part,” said Petrino. “He kept practicing hard, coming to meetings with a great attitude and kept his focus on being a leader when the opportunity came.”

After the Penguins (1-6) took a 3-0 lead midway through the second quarter, Missouri State countered with its best drive of the first half as the Bears marched 85 yards on 15 plays to take the lead. Struck was knocked out of the game on a second-and-10 play, just four snaps into the march before Johnson came on in relief to complete the scoring opportunity for the home side. He carried three times for 34 yards on the series before handing off to Celdon Manning for a key 12-yard pickup on second-and-eight to the YSU 2-yard line. Jeremiah Wilson then punched it to give the Bears a 7-3 lead with 1:43 to go in the second – his ninth career rushing touchdown.

Missouri State opened up the second half with a great 23-yard kickoff return by Von Young that set the Bears up at the YSU 44. Johnson and Manning then used the ground game to get MSU inside the 10 before Johnson found Damoriea Vick in the end zone for an 8-yard TD strike that made it 14-3 with 8:48 left in the third.

The tandem connected for another score on the Bears next possession. This time, it was a 31-yard missile from Johnson to Vick with 92 seconds left in the third that seemed to put things out of reach. The 61-yard scoring drive took just five plays and was set up by four straight rushes from Manning totaling 30 yards before the TD pass from Johnson.

Manning finished with a career-high 99 yards on 22 carries and 4.5 yards per touch, while Vick caught 5 passes for 59 yards to complete his first multi-touchdown game.

From there, the bend-but-don’t-break Missouri State defense came up with play after play.  On its final four drives of the afternoon, Youngstown State turned the ball over to the Bears three times, first on a punt, later on a botched trick play, and finally on downs in the closing minutes of the contest.

Tylar Wiltz led the Missouri State defensive unit, matching a career-high with 12 tackles with 12 solo stops and 3.0 tackles for loss. MSU’s defense added to its school-record season sack total with its 27th of the year while also accounting for 6 pass break-ups.

The Penguins did squeeze in a 58-yard touchdown drive in with 8:40 left in the game on a 6-yard TD pass from Joe Craycraft to Dra Rushton. That score was set up in part with a 35-yard pass completion from Craycraft to C.J. Charleston to the MSU 11. YSU then capped the six-play scoring drive two plays later.

Craycraft was 10-for-24 through the air for 100 yards, while Jaleel McLaughlin carried 20 times for 100 yards to lead the visitors.

Missouri State, which picked up a fourth straight victory for the first time since 2013, outgained YSU by a narrow 268-267 margin. The Bears also played turnover-free football while racking up just one penalty on the afternoon.

“We got leadership from our players and our assistant coaches, and we got a share of that conference championship which feels really good,” said Petrino who inherited a Missouri State program that was 1-10 last season and picked ninth in the MVFC preseason poll.

Ironically, the 2020-21 Bears matched the 1989 and 1990 MSU conference championship teams with their best MVFC record in a season at 5-1 and picked up five league wins for the first time since 2013.

In the first half, Youngstown State drew first blood with a 38-yard field goal by Colt McFadden that capped a 14-play, 45 yard drive for the Penguins with 8:21 left in the second quarter. The Bears defense kept YSU out of the end zone with a key second-down sack by Tyler Lovelace and then a pass break-up by Kyriq McDonald on third down to hold the visitors to a field goal try.

The Penguins punted on three other occasions in the opening half and also missed a 40-yard field goal try by McFadden.

As a result of North Dakota State’s win at Northern Iowa on Saturday, the Bears will not earn the MVFC’s automatic bid to the NCAA Division I FCS playoffs, but as league co-champions are still very much in consideration for a playoff berth.

The Bears will learn their postseason fate next Sunday (April 18) with the FCS playoff selection announcement. This year’s NCAA championship field will include just 16 teams – instead of the traditional 24 – with only six at-large bids up for grabs.