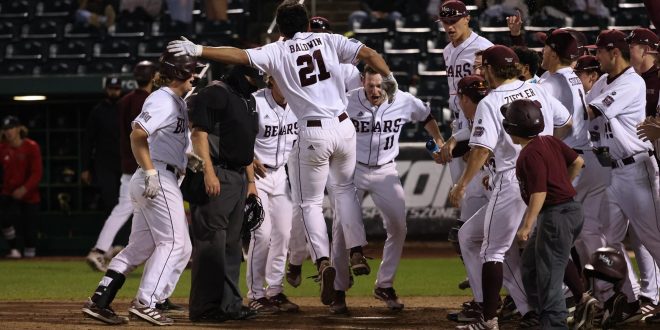 SPRINGFIELD – Drake Baldwin led off the bottom of the ninth inning of Tuesday’s first-ever regular season baseball meeting between Missouri State and Drury with a solo home run to hand the Bears a 9-8 victory.

One team scored in every inning but the eighth in a back-and-forth game at Hammons Field as the Bears (11-10) picked up a win in their final at bat for the fourth time in the last six games.

Cam Cratic scored three times while batting leadoff, Ben Whetstone went 3-for-3 with a pair of walks, and Jaden Rolffs launched his team-leading eighth home run of the year to pace the offense.

Baldwin put the Bears on the board in the first with an RBI single and Dakota Kotowski added a two-run double to make it 3-0, but the Panthers (8-11) reeled off five unanswered runs over the next two innings to lead 5-3.

Logan Geha hit a solo homer in the fourth and Cratic and Whetstone followed with back-to-back doubles for a 5-5 score, only to see Drury string together a trio of two-out singles in the fifth to lead 7-5.

Rolffs made it 8-7 Missouri State in the sixth with a three-run homer, and a fly ball found the grass in right-center for Drury in the seventh for another tie at 8-8.

Neither team scored in the eighth, with MSU’s Hayden Juenger (2-1) striking out the side on 12 pitches before working out of a jam in the ninth to finish with five strikeouts in 2.1 innings.

That set up Baldwin’s walk-off homer, Missouri State’s first since Mason Hull against Valparaiso in May 2019.

The Bears return to Missouri Valley Conference play with a four-game series against preseason favorite Dallas Baptist at Hammons Field April 9-11. Friday’s game one is set for a noon start and will air live nationally on ESPNU.