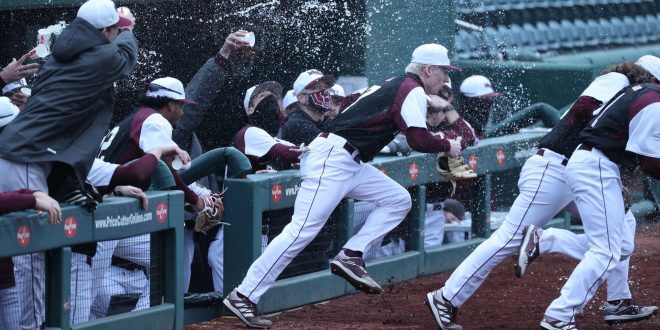 Leading Off
Missouri State (10-10) hosts Drury (8-10) at 6:30 p.m. Tuesday at Hammons Field in the first ever regular season meeting between the schools in baseball.

Series History
This is the first regular season between Missouri State and Drury, though the teams have met four times previously in an exhibition series known as the “Battle for Bell.” The series began in 2012 to assist former MSU shortstop and Glendale High School baseball coach Howard Bell in his fight against Amyotropic Lateral Sclerosis (ALS), commonly known as Lou Gehrig’s disease. Bell lost his battle with ALS in 2013, and the series resumed in 2017 to continue the efforts to honor Bell and find a cure for the disease.

News & Notes
• Missouri State’s last three victories have come in its final at bat – a 10-inning win March 30 at SEMO, a walk-off hit by pitch for Cam Cratic on April 1 against Bradley, and a walk-off single by Mason Hull versus BU the following day.

• Keith Guttin currently ranks third on the NCAA’s Division I wins list for active coaches and 19th all-time with 1,298 for his 39-year career; he is two wins away from Fresno State’s Bob Bennett in the 18th spot on the chart.

• Junior Jaden Rolffs has four home runs in MSU’s last six games, including three games in a row from March 23-April 1, the first Bear to do that since Jeremy Eierman in March 2017.

• Up next for the Bears will be a nationally televised game on Friday, April 9, when the Bears host Dallas Baptist for a noon game on ESPNU.