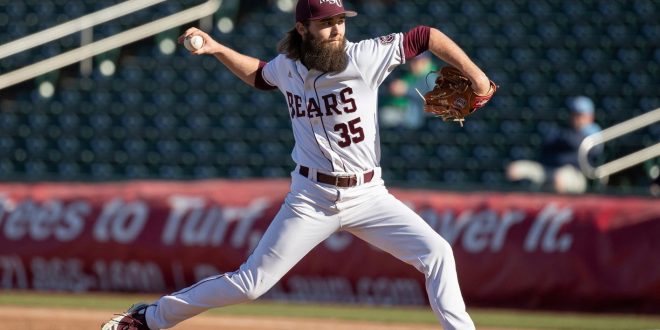 Prime 9
1) Missouri State concludes the month of March with a trip to SEMO before opening Missouri Valley Conference play April 1-3 at home against Bradley.

2) The MVC has a new format for league series this season, with teams meeting four times per weekend with a doubleheader on day two. The first game of the doubleheader will be scheduled for seven innings.

5) The MSU offense has scored at least 11 runs four times in 15 games this season after doing so just three times in the previous 34 games dating to April 2019.

6) Missouri State has four college graduates on the roster, with Jack Duffy, Logan Geha, Ben Whetstone and Logan Wiley each electing to use the additional season eligibility granted to 2020 spring athletes.

9) Keith Guttin currently ranks third on the NCAA’s Division I wins list for active coaches and 19th all-time with 1,295 for his 39-year career; he is 5 wins away from Fresno State’s Bob Bennett in the 18th spot on the chart.

Leading Off
The Missouri State Bears (7-8) are back in action after a week off, visiting Southeast Missouri State for a 2 p.m. game on March 30 before opening Missouri Valley Conference play with a four-game set against Bradley April 1-3 at Hammons Field.
The MVC schedule takes on a new format this season, with teams meeting four times per weekend with a doubleheader on day two. The first game of the doubleheader will be scheduled for seven innings.

Series Histories
The Bears lead SEMO 66-40 in the all-time series with a 28-24 advantage in Cape Girardeau. The teams did not play between 1981 and 1992, and Keith Guttin is 32-13 against the Redhawks since the series resumed 29 years ago. Missouri State won the last meeting 8-2 on April 2, 2019 at Capaha Field.
Missouri State holds a 68-40 lead against Bradley with a 36-15 mark at home, though the Braves swept the series at Hammons Field in 2019