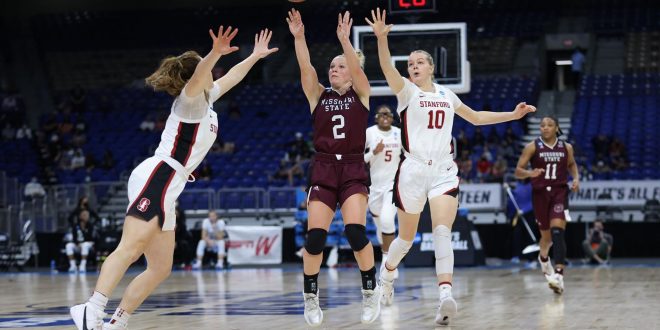 SAN ANTONIO, Texas – A remarkable season for the Missouri State Lady Bears ended Sunday afternoon with an 89-62 setback to No. 1 overall seed Stanford in the Sweet Sixteen at the Alamodome.

The Lady Bears (23-3), tied a school record for fewest losses in a season, posted the second-best winning percentage in school history (.885), and as a No. 5 seed in the NCAA Tournament tied the best seed ever in MSU’s 16 appearances en route to the Lady Bears’ fifth Sweet 16 trip.

Stanford (28-2) led 15-3 after six minutes and never looked back, ending the Lady Bears’ 19-game win streak, the second-longest in school history, with the help of a 15-for-32 showing from 3-point range. The Cardinal held Missouri State to 31 percent shooting from the floor, a tick below their No. 2 nationally ranked defensive average.

The game still featured plenty of highlights for the Lady Bears, including a 25-point fourth quarter in which Elle Ruffridge went 4-for-4 from beyond the arc to improve to 15-for-23 (.652) in her NCAA Tournament career, the best percentage in school history.

Missouri State also set a school record with its plus-10.8 rebound margin for the season and allowed 57.2 points per game, the second-best defensive average in school history.