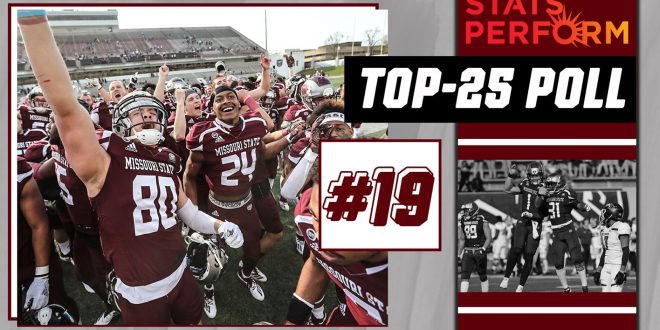 CHICAGO – After three straight victories over ranked opponents, Missouri State has finally cracked the STATS Perform FCS Top 25 football poll, released Monday. The Bears, now 4-1 on the spring, check in at No. 19 this week.

Coach Bobby Petrino‘s squad has reeled off consecutive wins over No. 21 South Dakota, No. 10 Northern Iowa and No. 10 Southern Illinois over the last three weeks to earn their way into the poll. This week’s 30-27 victory over Southern Illinois at Plaster Stadium lifted MSU to its first 4-1 start in MVFC play since 1992.

The Bears, who are 3-0 in MVFC road games this season, travel to No. 6 North Dakota this week for an 11 a.m. start in Grand Forks. Missouri State is currently locked in a four-way tie for first place in the league standings with UND, North Dakota State and South Dakota State – all at 4-1.