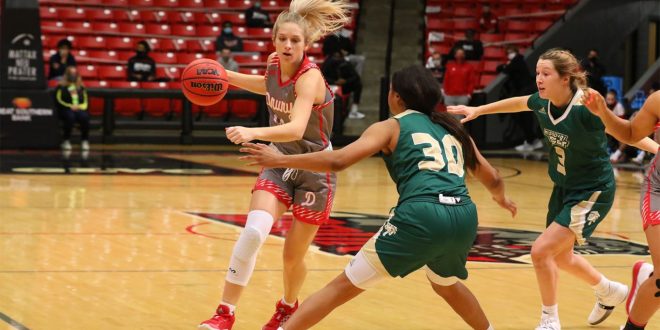 It marks the third year in a row a Drury player has been named to the honor after Hailey Distelkamp earned the national Player of the Year award in 2019 and 2020.

“The WBCA is pleased to name Paige Robinson as the 2021 WBCA NCAA Division II Player of the Year,” said WBCA Executive Director Danielle Donehew. “Paige has played an integral role in guiding her team to an outstanding season under extraordinary circumstances because of the pandemic. She is very deserving of this distinguished honor. The WBCA applauds Paige for her hard work, dedication, and contributions to the game during the 2020-21 season.”

The award is the latest in a string of honors for Robinson. The Bethany, Illinois native was also named an NCAA-II All-American by the WBCA. Earlier this year, she was named the Player of the Year in the Great Lakes Valley Conference, the Most Valuable Player of the GLVC Tournament, and the MVP of the Midwest Regional Tournament.

Robinson led the GLVC and ranks 11th in NCAA-II in scoring, averaging 21.1 points per game. She ranked third in the conference in three-pointers made (2.4 per game), fourth in the league in assists (4.8 per game), fifth in blocked shots (1.1), sixth in steals (2.0), and seventh in three-point percentage (.396). Robinson scored a career-high 37 points in Drury’s second game of the season on Nov. 29 at Lindenwood. She registered three double-doubles and posted the second triple-double in program history when she put up 22 points, 11 rebounds, and 11 assists on Missouri S&T on Dec. 18.

The Lady Panthers are 23-1 and will face Lander on Wednesday at 5 pm in the national semifinals in Columbus, Ohio. The winner advances to the national championship game on Friday at 7 pm.