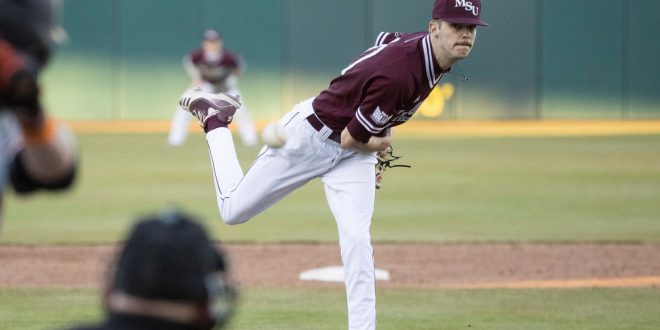 Bears Rally from Five-Run Deficit to Win at No. 18 Oklahoma State

STILLWATER, Okla. – Missouri State used a six-run seventh inning Tuesday to erase an 8-3 deficit on the way to an 11-8 victory over 18th-ranked Oklahoma State at O’Brate Stadium.

The Bears (7-8) scored three times in the first on a solo home run from Ben Whetstone and a two-run blast by Jaden Rolffs, his fourth of the season, only to see the Cowboys get a three-run homer from Nolan McLean in the bottom half of the inning to even the score at 3-3.

That began a stretch of eight unanswered runs for the Cowboys (12-6-1), who added a two-run homer in the fourth and scored on a double, a walk and a balk in the fifth for an 8-3 advantage.

The Bears left the bases loaded in both the third and fourth innings before breaking through in the seventh, putting three men on with one out before Grant Wood singled, Dakota Kotowski was hit by a pitch, and Blake Mozley and Jack Duffy walked in succession for an 8-7 score, and Cam Cratic came through with two out with a line drive up the middle for a 9-8 advantage.

Trey Ziegenbein (2-0) held the Cowboys scoreless through three innings to get the mound win, allowing one hit and fanning five in the sixth through eighth innings.

Missouri State loaded the bases again in the ninth and OSU walked Drake Baldwin and Landen Wood to force home Duffy and Whetstone, and Hayden Juenger struck out the side around an infield single in the bottom of the inning for the save as MSU pitching logged a season-high 14 strikeouts.

The win marked Missouri State’s first over a top-20 foe since topping Arkansas in the 2017 Fayetteville Regional final.

The Bears are off until a March 30 trip to SEMO.