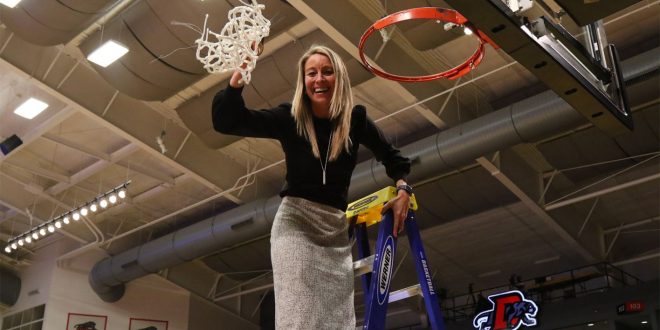 Eagan completed her first season as head coach of the Lady Panthers and led the program to a Great Lakes Valley Conference championship during the regular season and in the league tournament. Drury won the Midwest Regional championship advancing to the Elite Eight and NCAA-II semifinals with a 23-1 record.

“The WBCA is proud to announce Amy Eagan as the 2021 recipient of the Pat Summitt Trophy presented to the United States Marine Corps/WBCA NCAA Division II National Coach of the Year,” said WBCA Executive Director Danielle M. Donehew. “We also congratulate the other head coaches who were selected by their peers as finalists for this prestigious award.

“Amy was chosen for this honor after leading her team to an exceptional season. The WBCA recognizes and applauds her leadership example that can be seen in her student-athletes, institution, and community.”

Eagan took the helm of a Drury program that went 32-0 and graduated the two-time NCAA-II Player of the Year, Hailey Diestelkamp, and two-time All-American Daejah Bernard while winning their fourth-straight league title. Eagan’s 2021 Lady Panthers continued their streak of conference championships and advanced to the Elite Eight for the fifth time in program history.

This year’s honor marks the third straight season the WBCA’s Coach of the Year has come to Drury. Molly Miller was named to the award in 2019 and 2020.

The Lady Panthers will face Lander on Wednesday at 5 pm in the national semifinals in Columbus, Ohio. The winner advances to the national championship game on Friday at 7 pm.