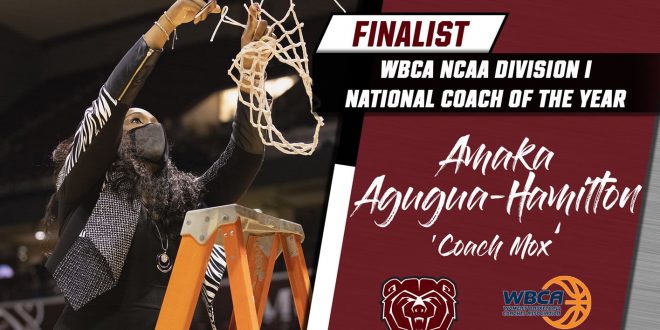 ATLANTA – The Women’s Basketball Coaches Association announced Wednesday the finalists and winner of the 2021 United States Marine Corps/WBCA NCAA Division I National Coach of the Year award, with Missouri State’s Amaka Agugua-Hamilton one of 10 head coaches to make the list.

Agugua-Hamilton, the 2020 and 2021 Missouri Valley Conference Coach of the Year and 2020 WBCA Spalding Maggie Dixon Rookie Coach of the Year winner, made the select group of finalists, while North Carolina State’s Wes Moore was the winner.

In year two under “Coach Mox”, the Lady Bears are 22-2 entering Wednesday’s NCAA Second Round game with Wright State and tied the highest seed in program history as a No. 5 in this year’s bracket.

Missouri State recorded the program’s first ever unbeaten conference (16-0) and road (11-0) records this season and has been ranked in every Coaches Poll and 13 weeks by the AP.

WBCA NCAA Division I National Coach of the Year Finalists