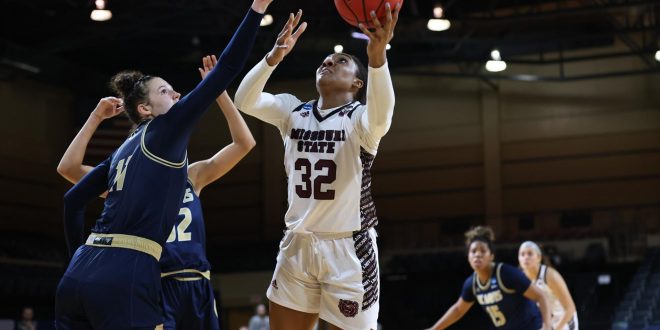 Sydney Wilson scored 11 seconds later to regain the lead and ignite a 17-0 run that carried into the fourth quarter and ended when a Franklin free throw put MSU ahead 50-34 with 9:08 left in the game.

Wilson added a 3-pointer with a 57-37 lead with 5:17 remaining and the Aggies had one final run, closing the gap to 62-51 with 1:48 on the clock thanks to a flurry of 3-pointers and pressure defense, but the Lady Bears weathered that storm and scored the final eight points.

The Lady Bears held a 53-32 rebounding advantage in the game and collected 20 offensive boards, including 13 in the second half with a 29-11 lead on the glass. Franklin’s 18 rebounds were a career high and tied the fourth-best single-game total in school history, breaking LaTanya Davis’ 26-year-old NCAA record of 13 boards against Utah.

Missouri State’s defense made UC Davis its 22nd opponent in 24 games to score below its season average and held the Aggies to 5-for-27 shooting on 2-pointers and 31 percent overall.

The Lady Bears will play 13th-seeded Wright State (19-7) in Wednesday’s second round after the Raiders upset Arkansas on Monday. Time, location and television information will be announced late Monday by the NCAA.