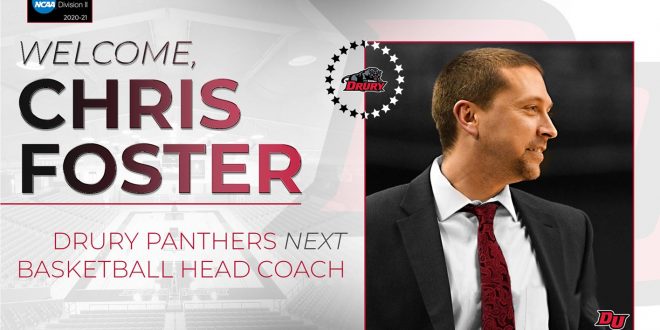 SPRINGFIELD, Mo.— Chris Foster has been named as the next head coach of the Drury University men’s basketball program by Vice President and Director of Athletics, Corey Bray. Bray made the announcement on Tuesday, two weeks after the previous head coach, Steve Hesser, announced his retirement after 17 seasons leading the team.

Foster arrives from McKendree University, where he led the fellow Great Lakes Valley Conference program for three years. This season, he guided the Bearcats to their best finish ever in the GLVC as McKendree went 10-8 in the conference and ended the year in fourth place overall. In 2019-20, Foster put together the program’s first-ever above .500 season at the NCAA-II level as the Bearcats went 15-13 and 10-10 in the conference.

Before his stint at McKendree, Foster was the head coach at Truman State, also a GLVC member, where he not only turned a program around, he laid the foundation for a squad that has been one the best teams in Division II during the last few seasons. The Bulldogs were ranked as high as number two in the nation this year and are playing in the Elite Eight this week in Evansville, Indiana.

Foster spent four seasons as Truman State’s head coach putting together a record of 83-40. His team reached the NCAA-II tournament in 2017 and 2018, and their 2017 trip was their first national tourney berth in 11 years.  While at Truman State, Foster recruited and signed four-time All-GLVC selection Brodric Thomas, who began this season in the NBA with the Houston Rockets, and is currently on the Cleveland Cavaliers roster.

“I am very excited that Chris Foster will be the next head men’s basketball coach of the Drury Panthers,” said Corey Bray. “Coach Foster shares our vision for an elite Division II men’s basketball program and I am confident that he has the skills and experience to continue the tradition of excellence that has existed at Drury for decades and set at a national championship level by coach Steve Hesser.

“We were very fortunate to have an extremely talented candidate pool which speaks to the quality of our program.  After an extensive process, Chris rose to the top.  His familiarity with the Great Lakes Valley Conference and recruiting in this region will help him hit the ground running.  Please join me in welcoming Chris to the Drury Panthers family and supporting him as he leads a program that helps student-athletes become more than champions – in the classroom, in the community and in competition.”

Foster fills the role left by Steve Hesser, who announced his retirement on March 10 after 17 seasons as head coach. Hesser exited as the program’s all-time leader with 354 career wins and the 2013 NCAA-II National Championship. Three years ago, Foster replaced Harry Statham, who was the head coach at McKendree for 52 years.

Foster is the 20th head coach in Drury’s 111-year history as a men’s basketball program, and he is only the eighth man to fill the role since 1965.

“I am humbled to be named the next head coach at Drury University,” said Foster. “I am grateful to Athletic Director Corey Bray and President Dr. Timothy Cloyd for the opportunity to lead the men’s basketball program into the future. It is an honor and privilege that I will not take lightly. Drury has a rich history of pursuing excellence both on the court and in the classroom, I am excited to be a part of a program whose expectation is to be exceptional.  My wife, Kylie, son Jase and daughters Avery and Riley look forward to embedding ourselves into the Panther community. As a family we are excited to get to campus and begin building relationships with all those that make Drury such a special place.”

Prior to becoming head coach at Truman State, Foster was the associate head coach and recruiting coordinator for the Bulldogs.

Originally from Ironton, Missouri, Foster played college basketball for Northern Iowa, was an All-Freshman selection in the Missouri Valley Conference, and scored more than 1,000 points in his collegiate career. He was a part of NCAA tournament teams in 2004 and 2005, and he ranks 41st on Northern Iowa’s all-time scoring list.

Foster stayed at UNI to serve as a graduate assistant, then transitioned to director of basketball operations for the Panthers. After coaching at the high school level, he returned to his alma mater to rejoin the coaching staff as video coordinator in 2011.

Foster is 117-80 in seven seasons as a collegiate head coach and owns a 73-55 mark within the GLVC. His 2018 Truman State squad was the co-West Division champion in the league, and three of his teams won the conference’s Sportsmanship Award.

Drury Athletics will host a news conference via Zoom at 3 pm (Central) Tuesday afternoon to formally introduce Foster to the local media.