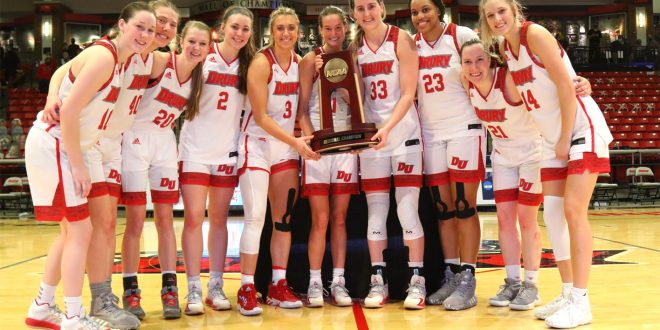 SPRINGFIELD, Mo.— The Drury Lady Panthers are seeded third in the NCAA-II Elite Eight as the women’s basketball championship committee announced the seeds and updated the national bracket on Tuesday.

Drury will face sixth-seeded Charleston (W. Va.) on Tue., March 23, at 11 am (Central) at the Greater Columbus Convention Center in Columbus, Ohio. The game is the first of four national quarterfinal games that day. The winner of the Drury-Charleston game will play the winner of second-seeded Lander (ranked fifth in NCAA-II) versus number seven seed Azusa Pacific in the semifinals on Wednesday at 5 pm.

The other side of the Elite Eight bracket has number one ranked, and top-seeded Lubbock Christian will play the number eight seed and 15th ranked Daemen in the quarterfinals. Fourth-seeded Belmont Abbey ranked 13th in NCAA-II, will play fifth-seeded and 20th ranked Central Missouri the final quarterfinal match-up.

Drury is 22-1 and advanced to the national quarterfinals after their 88-69 win over Ashland in the Midwest Regional Championship game on Monday at the O’Reilly Family Event Center. The win marks the fifth time in program history the Lady Panthers have won a regional title, and they are in the Elite Eight for the second-straight tournament. Drury advanced through the Midwest Regional in 2019 and reached the national semifinals. The Lady Panthers were the top seed in the regional last season, but the NCAA-II tournament was canceled by the coronavirus pandemic.

Each of Drury’s three games will be carried live on local Springfield radio through the Zimmer Communications network of stations, JOCK 96.9 FM/99.9 FM/1060 AM. Each of the quarterfinals games will be broadcast with live video on NCAA.com, while the semifinals and championship game will be carried on the CBS Sports Network.