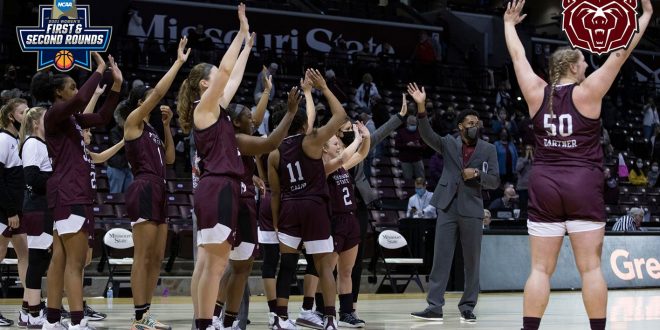 Starting Five – Storylines for the NCAA First Round
1) The No. 17/20 Missouri State Lady Bears are Missouri Valley Conference champions for the second consecutive season, and enter their 16th NCAA Tournament as a No. 5 seed, tying the 2001 Final Four team for the highest seed in program history. MSU is 16-15 in NCAA play with Final Four trips in 1992 and 2001 and Sweet Sixteens in 1993 and 2019.

2) Missouri State is 71-9 overall since Dec. 20, 2018, ranking seventh nationally in total wins since that date and fourth in win percentage (.887), trailing only Baylor, UConn and FGCU. Six teams ahead of the Lady Bears on the wins list have been ranked No. 1 in the AP Poll over that span.

3) The Lady Bears are 40-6 in their last 46 games away from home, including a 13-1 mark this season. Missouri State finished the regular season as one of two Division teams this season with an 11-0 record in true road games.

4) Missouri State has won the rebounding battle in 20 of 23 games this year and 46 of the last 53, with a plus-10.7 margin this season on pace for a school record and a .802 defensive rebounding percentage that ranks second nationally after leading the NCAA last year with a .773 mark.

Scouting UC Davis
UC Davis is 13-2 overall and 9-1 in Big West play, winning both the regular season and tournament championships in that league. The Aggies feature Big West Player of the Year in Cierra Hall and the league’s top defender in Sage Stobbart, and rank 20th nationally in scoring defense (55.9), fourth in field goal defense (.329) and seventh in 3-point defense (.250). UC Davis averages 65.4 points per game and shoots 43.4 percent overall, 36.6 percent on 3-pointers and 76 percent at the foul line with a plus-1.9 rebound margin.

Series History
Missouri State has never played UC Davis in women’s basketball and is 2-1 against current Big West Conference membership. The Lady Bears do have NCAA history against the Big West with a 72-70 win against UC Santa Barbara in the 1999 first round.

NCAA Tournament History
Missouri State boasts a rich NCAA Tournament history with 16 total appearances, Final Four trips in 1992 and 2001, and Sweet Sixteens in 1993 and 2019. The Lady Bears are 16-15 all-time in NCAA play, with records of 8-7 in the first round, 4-4 in the second round, 2-2 in the Sweet 16, 2-0 in the Elite 8, and 0-2 in the Final Four.
This is the ninth time Missouri State has earned a single-digit seed in NCAA play. The Lady Bears own a 14-8 record when seeded ninth or better, and are 7-1 in games as the higher seed.
Since Missouri State’s first appearance in 1991, only four schools (UConn, Louisiana Tech, Old Dominion and George Washington) from outside the Power Five leagues own more victories, and just three (UConn, LT, ODU) have a better winning percentage in the Big Dance.
Additionally, the Lady Bears are one of 19 Division I programs with a Sweet 16 appearance in the 1990s, 2000s and 2010s.