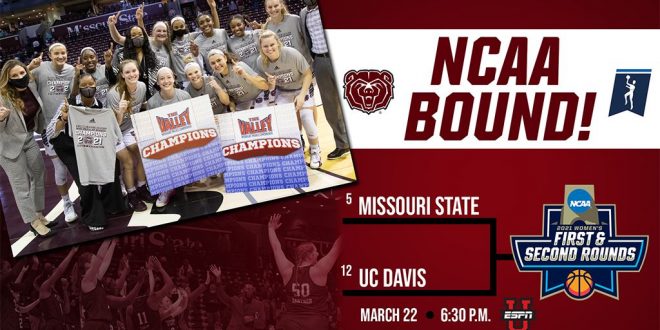 SPRINGFIELD – The Missouri State Lady Bears (21-2) tied the program’s highest ever NCAA Tournament seed with a spot on the No. 5 line and will open their 16th NCAA appearance Monday, March 22, against 12th-seeded UC Davis. The game will tip off at 6:30 p.m. Central at Bill Greehey Arena on the campus of St. Mary’s University in San Antonio, and air live nationally on ESPNU.

Missouri State is 21-2 overall, won its second consecutive MVC regular season title with a 16-0 league mark, and enters the NCAA Tournament ranked 17th in the USA Today Coaches Poll and 20th by the Associated Press.

UC Davis is 13-2 overall and 9-1 in Big West Conference play, sweeping the regular season and tournament titles in that league. Missouri State has never played the Aggies in women’s basketball and is 2-1 against current Big West members.

The other half of the sub-regional is fourth-seeded Arkansas and No. 13 Wright State. The winners play on March 24.

San Antonio and the surrounding region will play host to the 2021 NCAA Division I Women’s Basketball Championship, with three sites in San Antonio and additional venues in Austin and San Marcos.

First- and second-round attendance will be limited to players and player guests. Starting with the Sweet Sixteen through the Women’s Final Four, a reduced number of fans will be allowed in the Alamodome. In conjunction with local health authorities, all fans must physically distance and wear masks.