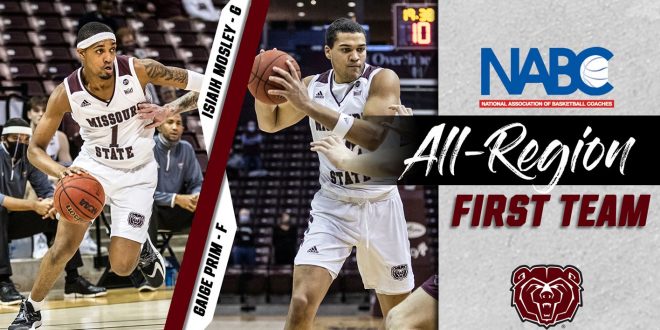 KANSAS CITY, Mo. – The National Association of Basketball Coaches (NABC) announced today the 2020-21 NABC Division I All-District teams and coaches, as selected by NABC-member head coaches in NCAA Division I. Missouri State’s Gaige Prim and Isiaih Mosley were both named to the District 16 First Team as part of the announcement.

Mosley (So., Columbia, Mo.) became the first MSU player to lead the MVC in scoring after he posted 19.8 points per game this season. He also leads the MVC in free throw percentage (.847), ranks second in the conference in minutes played (33.8), is seventh in assists (3.1) and eighth in rebounds (6.3). A three-time MVC Player of the Week, Mosley scored in double figures 20 times this season, including 14 games of 20 points or more and 13 times leading the Bears in scoring.

Prim (Sr., Aurora, Colo.) is the conference’s top rebounder (9.1 per game) and ranks third in The Valley in scoring (16.7) and field goal percentage (.599). A two-time MVC Player of the Week this season, Prim is also among the conference leaders in blocks (3rd) and assists (10th). He scored in double figures in 21-of-24 games this winter with eight double-doubles and nine 20-point games.

Both players were named to the All-MVC first team, marking the first time the Bears have boasted a pair of first-team all-conference selections in the Missouri Valley. Mosley was also named the league’s Most-Improved Team captain, and Prim was named to the MVC All-Defensive Team.