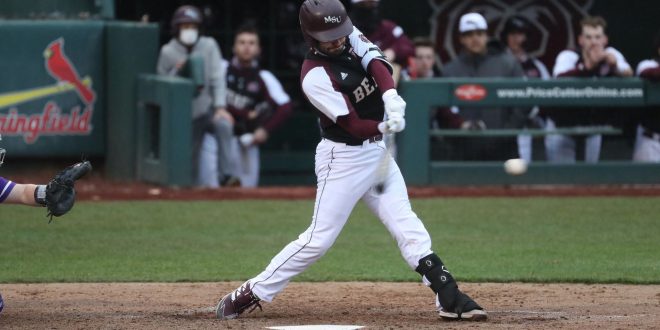 JONESBORO, Ark. – Missouri State spotted Arkansas State a 4-0 lead after an inning Wednesday afternoon and never recovered in a 7-3 loss to the Red Wolves on a windy day at Tomlinson Stadium.

The Red Wolves did all their first-inning damage with two outs, grabbing a 4-0 advantage with three singles and two MSU errors.

Missouri State’s pitching settled in after that, tossing four consecutive scoreless frames to allow the Bears (5-5) to close the gap to 4-3.

Jack Duffy extended his hitting streak to 11 games with a third-inning single before scoring on Dakota Kotowski’s two-out base hit, and the Bears tacked on two more runs in the fourth. Blake Mozley and Logan Geha singled and an ASU error loaded the bases to set up a two-run single from Duffy before MSU left the bases loaded.

Arkansas State (2-7) made it 5-3 in the sixth, plating a run on a bad-hop grounder to first, and used a combination of three walks and two singles to extend the lead to 7-3 after seven innings.

The Bears had a promising start to the ninth, with Duffy’s third hit preceding a Ben Whetstone walk, but were unable to get the tying run to the plate as the 3-4-5 hitters were retired in order.

Only one of the four runs against MSU starter Jared Viertel (0-2) was earned in his 4.2 innings, while the Bears knocked out ASU’s Max Charlton in the fourth before the Arkansas State bullpen allowed just three hits over the final 5.1 frames.

Missouri State is off until hosting Oral Roberts at 3 p.m. Tuesday, March 16. The Bears swept a two-game series from the Golden Eagles in Tulsa in February.