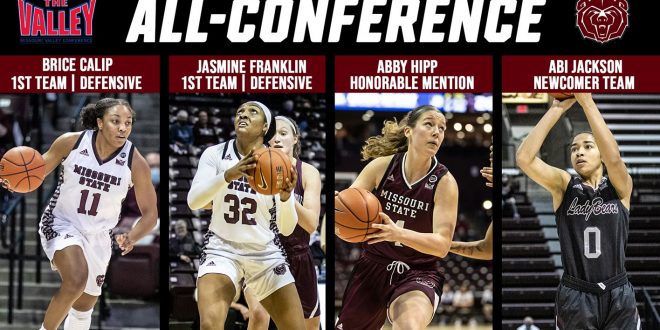 A repeat selection to both the First and Defensive teams, Calip leads the MVC and ranks eighth nationally with a 2.94 assist-to-turnover ratio, on pace for Missouri State’s single-season record. The Sapulpa, Okla., native leads the Lady Bears in scoring (13.4 points/game), assists (4.3) and steals (2.3), ranking second in the MVC in the latter two categories.

The senior guard has scored in double figures 18 times in 22 games and is a four-time MVC Player of the Week in 2020-21 with game-winning shots at Valpo and Illinois State to her credit. Calip also leads the MVC in free throw accuracy at 85 percent and improves that number to 91 percent in the fourth quarter.

Also a repeat first-team pick, Franklin averages 12.0 points and a league-high 9.5 rebounds per game while ranking second in the MVC in steals (2.3), fifth in field goal percentage (.515) and ninth in blocked shots (0.9). The junior forward from Fayetteville, Ark., has eight double-doubles on the season – all in MVC play – scoring in double figures 15 times with multiple steals on 16 occasions.

Hipp ranks third on the team in scoring at 9.7 points per game and second with 5.3 rebounds, shooting 51 percent overall to rank sixth in the MVC. The senior forward from Kansas City, Mo., has scored in double figures 11 times this season while shooting 50 percent or better from the floor 13 times in her 21 games.

Jackson appeared in all 22 games off the bench this season, averaging 4.8 points, 2.1 rebounds and shooting 44 percent from the field. The 6-foot-3 senior from Little Rock, Ark. ranks third in the MVC with 24 blocked shots, has scored in double figures four times, and blocked at least three shots in a game on four occasions.

The No. 17/21 Lady Bears (20-2, 16-0 MVC) take the No. 1 seed to the MVC Tournament for the 12th time in school history, opening play at 11 a.m. Friday, March 12, against the winner of Thursday’s game between No. 8 Southern Illinois and ninth-seeded Indiana State. The tournament takes place at TaxSlayer Center in Moline, Ill.