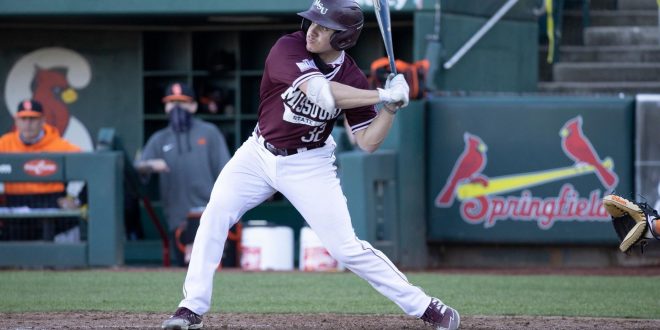 JONESBORO, Ark. – Missouri State suffered its first road setback of the season Tuesday evening with an eight-run fourth inning by Arkansas State powering the Red Wolves to a 10-2 victory at Tomlinson Stadium.

The Bears (5-4) scored first on Jack Duffy’s third home run of the season in the top of the third, a solo shot that extended his hitting streak to 10 games.

Arkansas State took advantage of two hit batters and a walk to set up Tyler Duncan’s two-run single in the bottom of the inning, then blew the game open with an eighth-run fourth.

The Red Wolves (1-7) pushed the lead to 3-1 with two out in the fourth when the potential third out was lost in the twilight sky, turning into an RBI double and opening the flood gates for ASU to collect three more extra-base knocks and hit for the team cycle on the way to a 10-1 advantage.

Ben Whetstone’s RBI single in the fifth made it 10-2 and capped the scoring, and freshman Cole Hill collected his first career hit in the sixth before the Bears left the bases loaded.

The Bears, now 3-1 on the road this year, and Red Wolves conclude the series at 3 p.m. Wednesday.