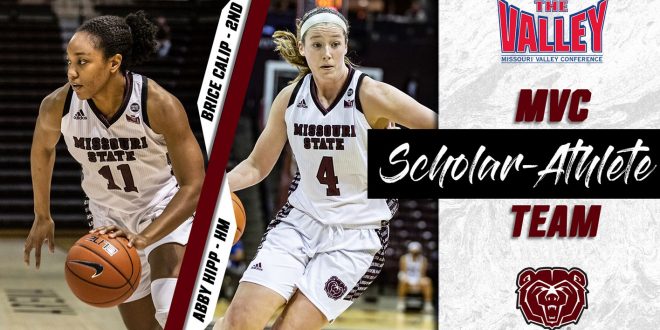 St. LOUIS – Missouri State’s Brice Calip and Abby Hipp were recognized Tuesday (March 9) for their work in the classroom and on the court, with Calip earning a spot on the Missouri Valley Conference Scholar-Athlete Second Team, and Hipp being selected to the honorable mention squad after a vote of the league’s sports information directors.

Calip leads the MVC and ranks eighth nationally with a 2.94 assist-to-turnover ratio, on pace for Missouri State’s single-season record. The Sapulpa, Okla., native leads the Lady Bears in scoring (13.4 points/game), assists (4.3) and steals (2.3), ranking second in the MVC in the latter two categories.

The senior guard has scored in double figures 18 times in 22 games and is a four-time MVC Player of the Week in 2020-21 with game-winning shots at Valpo and Illinois State to her credit. Calip also leads the MVC in free throw accuracy at 85 percent and improves that number to 91 percent in the fourth quarter. She is pursuing her Master’s in sports management.

Hipp ranks third on the team in scoring at 9.7 points per game and second with 5.3 rebounds, shooting 51 percent overall. The senior forward from Kansas City, Mo., carries a 3.96 cumulative grade point average in administrative management, and has scored in double figures 11 times this season while shooting 50 percent or better from the floor 13 times in her 21 games.

The criteria for the scholar-athlete team balloting parallels the CoSIDA (College Sports Information Directors of America) standards for the Academic All-America voting. Nominees must be starters or important reserves, have played at least 75-percent of a team’s games, and must carry at least a 3.30 GPA (on a 4.0 scale).

Student-athletes must also have reached sophomore athletic and academic standing at their institution (true and redshirt freshmen are not eligible) and must have completed at least one full academic year at the institution.

A total of 32 Valley student-athletes met the nomination criteria for scholar-athlete honors in 2021.

The Lady Bears take the No. 1 seed in the MVC Tournament for the 12th time in school history, opening play at 11 a.m. Friday, March 12, against the winner of Thursday’s game between No. 8 Southern Illinois and ninth-seeded Indiana State. The tournament takes place at TaxSlayer Center in Moline, Ill.