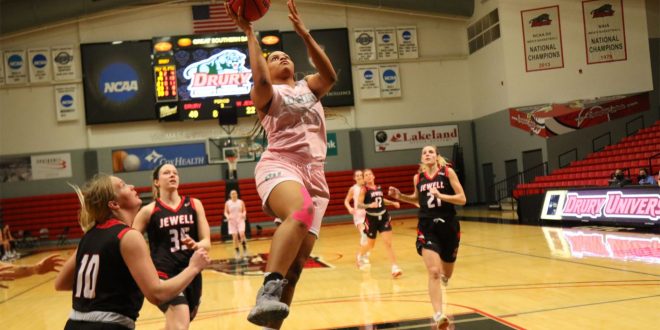 SPRINGFIELD, Mo.— The Drury Lady Panthers moved up one spot in this week’s NCAA-II coaches’ poll and are ranked third in the nation.

The Lady Panthers are 14-1 and are coming off of a 100-57 win over Southern Indiana in their lone game last week. Drury took the place of Charleston (WV), who fell from third to seventh after suffering their first loss of the season.

Lubbock Christian (13-0) is ranked number one and received all 22 first-place votes this week. Lander (14-0) is ranked second, while Hawaii Pacific (9-0) is ranked fourth.

Drury is the only team in the Great Lakes Valley Conference ranked in the top 25 this week. Two other teams from the Midwest Region are in the poll, however, with Michigan Tech (15-1) ranked 10th, and Grand Valley State (13-3) at number 18. Truman State (12-3) is receiving votes.

This week’s coaches’ poll marks the 115th consecutive week the Lady Panthers have been ranked in the top 25, the longest streak in the nation. It is also their 53rd straight week in the top 10.

Drury plays tonight against William Jewell in a 6:05 pm contest in the O’Reilly Family Event Center.