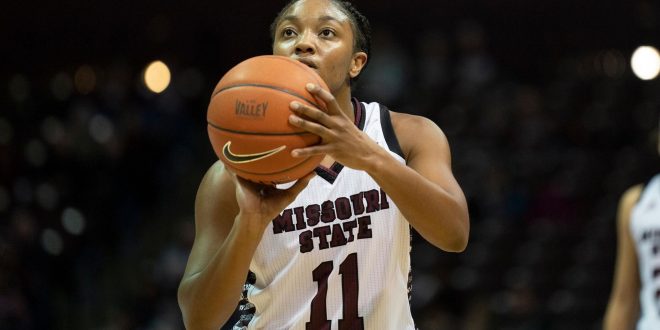 NORMAL, Ill. – Brice Calip hit a driving layup with 1.4 seconds left Saturday afternoon at Redbird Arena for a 73-72 Missouri State victory, helping the 23rd-ranked Lady Bears rally to win from a 16-point deficit for the second time this season.

Calip, who just 13 days ago hit three free throws with 0.8 seconds on the clock for a one-point win at Valparaiso, was the hero again, taking the in-bounds pass just inside half court and driving straight to the bucket for an off-balance shot that found the bottom of the net despite the foul.

The senior finished with 11 points while matching a career-high with eight assists as Missouri State improved to 13-2 overall and 9-0 in Missouri Valley Conference play with its ninth consecutive win both on the road and overall.

Elle Ruffridge tied the game at 59-all with 6:40 remaining on her third 3-pointer of the contest, and Sydney Manning gave MSU its first lead since the opening minute 46 seconds later.

The Lady Bears led 64-61 on a Calip free throw with 3:56 left, but the Redbirds hit a pair of treys in the next three minutes on the way to a 70-66 advantage. Manning buried a 3-pointer with 23.4 left and Sydney Wilson stole the ensuing in-bounds pass and scored for a 71-70 lead. Illinois State’s JuJu Redmond put the Redbirds ahead 72-71 with 4.4 ticks remaining to set up Calip’s heroics.

Missouri State shot 43 percent in the game after an 11-for-17 shooting performance in the fourth quarter and won 35-32 on the glass. Franklin led the scoring with 15 points, Ruffridge scored 13 and Abby Hipp added 12. Franklin added seven rebounds and three steals.

The Lady Bears are back home Feb. 19 and 20 to host Bradley in a pair of 7 p.m. games. Tickets are available at MissouriStateBears.com/tickets or at the Old Missouri Bank Box Office at JQH Arena, (417) 836-7678, during regular box office hours.

Notes and Milestones:
•    Missouri State overcame a 16-point deficit to win for the second time this season, also doing so Nov. 28 against No. 12/11 Maryland on Fort Myers, Fla.
•    The Lady Bears now have a combined 11 Quadrant 1 and 2 wins according to the NET, joining Stanford, South Carolina, Louisville and Texas A&M as the only teams nationally to make that claim. Only Stanford (10) exceeds MSU’s total of eight such road wins, and only the Lady Bears are at least 8-0 in Q1/2 road games this season.
•    MSU’s nine-game road win streak is tied for the second-longest in school history and trails only a 13-game streak from Jan. 18-Nov. 14, 2019. It also ranks as the third-longest active streak in Division I.
•    Missouri State is one of three teams nationally with at least eight road wins and no losses this season.
•    The Lady Bears are 9-0 in MVC play for the fifth time in school history, most recently a 10-0 start in 2019.
•    The victory was Missouri State’s third one-point win of the season.
•    MSU trailed for nearly 34 minutes in the game after being behind for less than 25 minutes in the first eight MVC contests combined.
•    Illinois State became the just the second team this season to score above its average against the Lady Bears.
•    Calip scored in double figures for the 11th consecutive game.